Traumatic events are those experiences that are perceived to be threats to one’s safety or stability and that cause physical, emotional, and psychological stress or harm. Usually these are events that fall outside the range of “normal” human experience and to which reactions vary according to the individual person.

Traumatic events are not always violent. They can range from moving somewhere new to a mass casualty incident. For some people trauma is experienced right after the event, for others the trauma may be relived for months or even years after.

It has taken a long time for studies to be done on the effects of 911 call taking on dispatchers.

The first study of its kind was conducted in 2012 by Dr. Lilly at Northern Illinois University. Dr. Lilly concluded that the most commonly reported symptom by 911 dispatchers was hyper-vigilance: “feeling keyed up or agitated; feeling on edge; trouble concentrating and sleeping”. Trauma and stress, go hand in hand, and the constant “fight or flight” physical and psychological reaction to stress that every 911 dispatcher goes through during their career can take a toll on their wellbeing.

It is important to remember that these are normal reactions to abnormal and traumatic experiences.

How do we fix it?

We can take care of each other, after all who can better understand the implications of the 911 environment than 911 dispatchers themselves?

We formed the Boston Area Peer Support Team to get people to their retirement healthy mentally and physically.

The type of intervention used depends on the situation, the number of people involved, and the type of event. Most situations will call, at a minimum, for a defusing before the involved personnel are released from the shift, others may require a full debriefing.

The goal of the Team is not a legal inquiry, investigation, or about placing blame in any way. It is about personal emotional responses, not the facts of the incident.  During activations of the Team, no notes are taken and recording devices are not allowed.  Discussions are private, and members are expected to adhere to a strict confidentiality agreement, with the only allowable exception being if someone presents a danger to themselves or someone else.

WHEN SHOULD I ACTIVATE CISM?

For the purposes of CISM, any event which has a stressful impact, enough to overwhelm the effective coping skills of either an individual or group.

Critical incidents are typically sudden, powerful events which are outside the range of ordinary human experiences.

The International Critical Incident Stress Foundation has identified a list of “terrible ten” incidents that, in most cases, should spark a CISM Team activation. However, we are not limited to the “Terrible Ten”.

Should a department or member of a department wish for a critical incident stress debriefing, or identify someone in need of services we can be contacted through the hotline at (617) 981-2186: 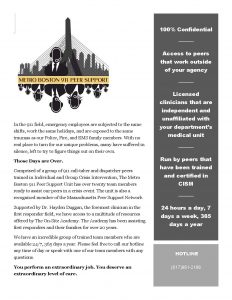