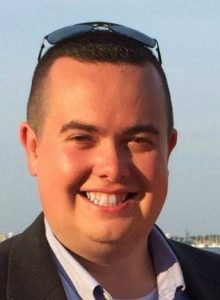 My name is Kevin Lessard and I am seeking re-election to the position of Co-Vice President of the Massachusetts Communications Supervisors Association for the Southeast Region.  I have served in this position since 2017 where I volunteered to fill an open position of Co-VP for the Southeast Region and hope with your support to continue in this role in the next year. I currently am employed as the Chief Emergency Telecommunications Dispatcher for the Town of Brookline Public Safety Department.

I previously served as an Emergency Telecommunications Dispatcher for the Town of Brookline and Town of Dedham with experience in Emergency Communications since 2004.  I graduated with my Master’s Degree in Public Administration from Suffolk University in January 2019 and have a Bachelor’s Degree in Criminal Justice from Westfield State College from 2005.  I recently completed the NENA Center Manager Certification Program in April of 2019.  In 2012, I graduated from the Communications Center Manager Program run by Fitch & Associates and Priority Dispatch.  While serving as the CO-VP for the Southeast Region I have worked on projects for the MCSA website and also sit on the MCSA Outreach Committee.

I would greatly appreciate your support to continue in my position as a Co-Vice President of the Southeast Region to further the efforts to increase the membership within MCSA, representing the needs and interests of all Telecommnicators from across the Southeast Region, and to continue in the efforts of advocating for 911 Professionals across the Commonwealth.  I would also like to continue working on important projects and causes such as Retirement legislation for E-911 Telecommunicators, Reclassification efforts for Telecommnicators, and also assisting all Dispatchers and Dispatch Centers across the Commonwealth as a member of the Outreach and Website Committees.

Thank you again and respectfully submitted,